On this day in 1938, 97-year-old John B. LaQue, the last survivor of the 18th New York Infantry, died peacefully at his home in Schenectady, N.Y., on the anniversary of the day he joined Company A in 1861. 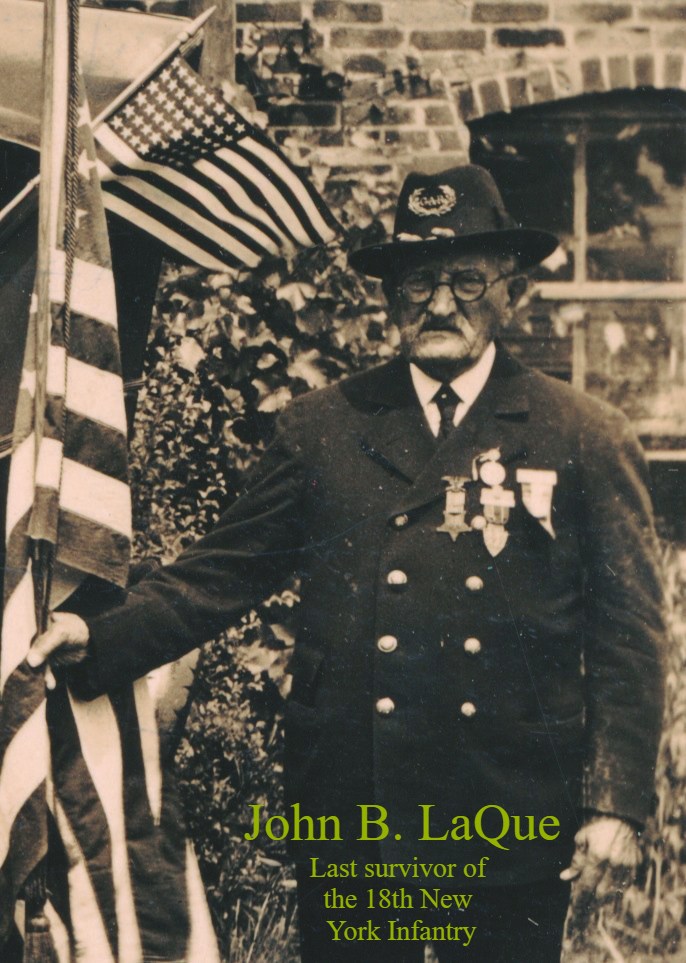 "Born on August 12, 1840, in the French-Canadian province of Quebec, LaQue moved to America with his family to Albany when he was a young child. After Lincoln called for troops after the war broke out, the twenty-year-old ax maker jumped at the chance and joined Captain Gridley’s company in Schenectady on May 1, 1861. Two months after the regiment mustered-out, LaQue married and eventually had ten children, six of whom lived to adulthood. A son that shared his name served in the Spanish-American War. Always passionate about military matters, LaQue followed intently the progress of his son’s war and the brutal fighting of the First World War. LaQue had been a machinist by trade and worked for many years at the American Locomotive Works, and retired from there in 1922. He was active with the GAR and a member of Schenectady’s Horsfall Post 90, and was often sent to faraway conferences as a delegate. Throughout the 1930s, LaQue drove himself in his Model T Ford around the northeastern states and attended many conferences and conventions almost monthly. LaQue and his automobile became a novelty together, and by 1936 his odometer had clocked over 141,000 miles. That same year, LaQue became the oldest resident of Schenectady and was one of two Civil War veterans left in the city. With the advent of radio, LaQue found fame when he made an appearance on the Major Bowes Amateur Hour on February 16, 1936. Listeners around the country heard Bowes describe LaQue’s appearance, and called on the aged veteran to stand up from the audience and be recognized. Amidst a studio of applause, the spry ninety-five-year-old stood from his seat and waved a little silk American flag. With his passing, the last witness to know the hardships, the voices, the horror, and the joys of the 18th New York Infantry died with him, and finally closed the history of the regiment."